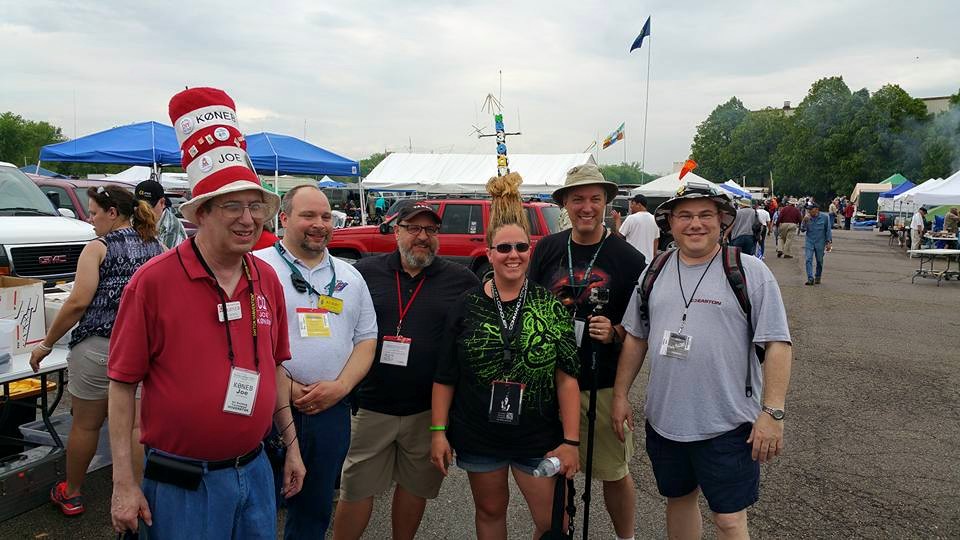 Another Hamvention has come and gone!  This was my 11th Dayton Hamvention, my first having been in 2005.  I decided after my first that this would be an annual thing for me and so far this goal has been met.  And so far I haven’t been disappointed.  This was also a special year for me because my Bob KA9MDP, my “Elmer” from 25 years ago, was able to attend, along with a few of my other friends from Dallas–Will N5KH, James N5BKL, Max N5BSA, Ken N2VIP, and Dhiren K5FPP.  I saw a bunch of other friends from Michigan and Indiana as well.  It was a great time and, as always, it went by quickly.

For the past ten years I have been able to get a good feeling about if the attendance has gone up or down since the previous year.  And my guesses have generally been close.  I’m nervous about doing it this year because, well, it just seemed so close to last year.  To the right I posted the “Official” Hamvention Attendance history since 2005 from the hamgallery.com website maintained by K8CX.  I put “official” in quotes because I can imagine that these numbers are probably close enough but not completely accurate, considering there is no way to reliably count the attendees.  Turnstiles are out, since the event is come-and-go, and, although the tickets are bar-coded, they are not scanned on entry.  My guess is that the Hamvention staff simply counts all tickets sold, all the youth tickets, and all the vendor passes.  It’s gotta be close enough.

So, you ask my opinion about this year’s attendance:  I believe we hit the elusive 25,000 barrier.  Some say no, and some say yes, but I was pretty satisfied with the crowds this year.  It was a little difficult to judge based on the weather (when it rains everybody goes inside) but in my opinion Friday was more crowded this year than last year.

Rumor was that this year there were only 7 to 9 unsold indoor vendor spaces this year (out of 506 total), and you could tell – it was hard to find the open tables.  When it rained, it was crowded inside.  And humid.  And not-so-pleasant smelling.  But it was good to see the crowds.

I think that the flea market was slightly emptier than last year.  As of May 13, the official outdoor vendor list showed 355 open booths (out of 2211).  Last year at the final report before Hamvention 2014 there were 329 open booths.

There are always a lot of forums, more than I really have time to sit through.  I did attend Joe Eisenberg KØNEB’s Kit Building forum, and also the Ham Nation forum.  Both were very well done. 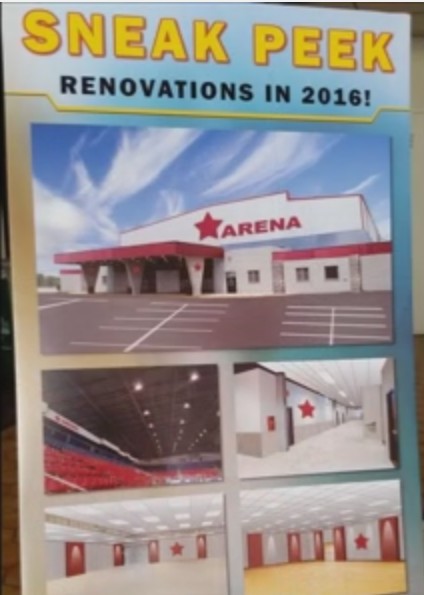 The Hara Arena – home of Hamvention for more than 50 years — is an absolute dump.  Some would say it’s an embarrassment, especially because Hamvention is a worldwide destination.  But it’s in baaaad shape.  Now, I will continue to visit Hamvention every year, because I am a die-hard.  And, since attendance is trending upward, I think that there are enough enthusiasts that Hamvention would continue to attract 25,000-ish visitors until the place fell on some of them.  But that doesn’t mean that it’s not a shame that a once-proud facility is in such bad shape.

To the left we see an artist’s rendition of what the Hara Arena should look like in a year or three.

Last year, Hara Arena announced that they had partnered with a company named “VenuWorks,” whose website touts themselves as providing  “Comprehensive management solutions for Arenas and Stadiums, Theatres, Museums and Galleries, Convention, Conference, and Expo Centers.”  First of all (and I know nothing at all about the details of this partnership) I’m fairly sure that the Hara Arena, being unable to purchase a few gallons of paint or a pallet of ceiling tiles, would be unable to afford a professional management company, especially after laying off all but twelve of its employees late last year.  My guess is that VenuWorks is probably going to get some level of ownership of the Arena, which, if true, would probably make things a lot better.  My guess is bolstered, rightly or wrongly, by the “Sneak Peek” above — there is no “Hara” in the design – just a big bright red star.  Which means, maybe, that there will either be no more Hara and they plan on calling it the “Star Arena”, or they will attempt to get a corporate sponsor and replace the star with something.  Wouldn’t that be interesting.

TO BE FAIR, the building hasn’t fallen down yet, although a few ceilings have.  I can’t imagine the level of improvement that will need to be made to the physical plant — plumbing, definitely.  And some of the wiring is scary.  And one can only imagine the amount of mold in the walls, based on how wet the bathrooms can get.  And there’s probably asbestos.  But boy-fix all of that, add a few coats of paint, and you will have a mediocre exposition center.

Not really.  Elecraft announced a new K3S radio, which looks cool and maybe someday I will own one.  When I have a spare $2899.95.  Maybe when the house is paid off.  Other than that, it was pretty much the same old stuff.  Still fun to look at, but same old stuff from last year.

More notes about the show

There was a neat area focused on mesh networking that I wanted to visit and look at more closely but I forgot to make it back there.  Digital radio was well represented.  However, DMR (MotoTrbo), D*Star, P25, Yeasu System Fusion (C4FM), etc. hasn’t really caught my interest yet.  I’m sure it will in the future when my disposable income increases.

My friend Richard Lenoir KI5DX brought his Main Trading Company from Paris, Texas had a big presence selling equipment inside, and they seemed to be doing extremely well.

A number of friends of mine noted the increase in old Drake equipment in the flea market and we wondered about that.  A lot of it probably came from the estates of silent keys.  I once borrowed a Drake TR-4 from my radio club way back in 1992 and used it on 10 meters from my bedroom.

Lemon James didn’t show up this year.  Someone said that they saw her walking around but I never found her booth and according to the official list of outdoor vendors she never ordered one this year.

So what did I buy?

What went wrong this year?

Every year, something goes wrong.  Over the years, the list has grown to include things like counterfeit tickets wreaking havoc at the prize drawings, problems with the vendor reservations systems, and Poopocalypse 2011.  I hate to mention things that go wrong because DARA knows they went wrong and they will fix it if it is something that can be fixed.  But if I don’t mention the big thing that went wrong this year, someone will call me out on it.  So I’ll mention it.

The audio in the arena was absolutely horrible.  During the prize draw, it was sometimes very very difficult to hear the ticket numbers being called out.  Fault for this probably lies with the Arena system, so I’ll just leave it at that.  But they made it through the prize draw because there was really nothing they could do about it anyway.

I find that as I attend more and more Hamventions I find it harder to be amazed about anything there, and I attend every year “just because” and I plan on attending every year for the rest of my life “just because.”  I don’t even take any pictures anymore because I’ve seen it all before.  And that’s OK.  Because I still have a great time.  But, if you’ve never gone to Hamvention, you will likely be amazed (or even overwhelmed) the first few times you do go.

And one must mention that the Hamvention is operated solely by volunteers.  Lots and lots of volunteers.  There are 60-some volunteer chairmen and assistant chairmen who manage a ton of other volunteers to run the show-according to the 2015 Hamvention Program there were well over 400 volunteers this year.  Although some things may go wrong, it’s hard to fault anybody because they all do it for the love of it.

I’ll leave you all with this.  Joe Eisenberg KØNEB is the official Hamvention photographer, and he has been putting together Hamvention slideshows since 2004.  Joe’s contribution this year is “The Boys are Back in Town.”  Enjoy!