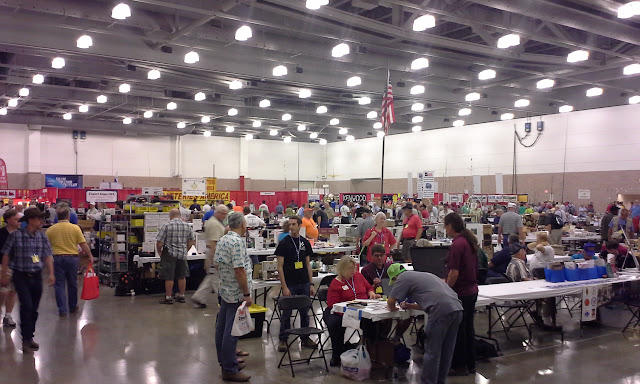 For the first time in a number of years I was able to attend Ham-Com.  The Dallas-Fort Worth area has been host to this popular ham radio convention for 38 years.  Over the years this gathering has been held in Arlington and Plano, and this year it found a new home at the beautiful Irving Convention Center.

Billed as “The Largest Amateur Radio Convention In Texas,” it is pretty big as far as hamfests go.  Held traditionally on the second weekend of June, it’s a two-day event–but, unlike Hamvention in Dayton, one day is sufficient to see the whole thing.  However, the Friday and Saturday arrangement seems to work well for attendance, attracting those with both traditional Monday-Friday jobs, as well as those who may work weekends but be able to get the Friday off.  In terms of size, it seems larger than the current Fort Wayne Hamfest, but smaller than Fort Wayne used to be in the good old days.  However, the Fort Wayne Hamfest has seen participation, attendance, and actual square-footage decline over the past 10-15 years as Ham-Com keeps growing and growing.  Part of that I attribute to Ham-Com’s successful marketing–Ham-Com, like the Dayton Hamvention, is marketed as a product, not a fundraiser.  Ham-Com has a great website too.

As this was the first year that Ham-Com was held at the Irving Convention Center, there were a few hiccups, and that was to be expected.  Yet, I still heard complaints from people less patient than I.  Perhaps the biggest complaint was parking.  The Irving Convention Center parking structure has a height limitation of seven feet, which is a limiting factor for most ham radio vehicles with any type of antenna installed.  Many vehicles, including my truck, needed to park out in a grassy parking lot with deep ruts, likely caused from vehicles parking at the center after the heavy spring rains that we had here.  Imagine if those rains happened during the show!  Anything less than a four wheel drive vehicle would be screwed.  If you plan on coming next year, you might consider (*gasp!*) removing your antennas and trying to go for the parking garage before it fills up.

Another parking complaint was the cost — the Irving Convention Center charges $5 to park with and no in-and-out privileges (Ham-Com parking used to be free up until last year at the Plano Center).  This didn’t really bother me, it’s very comparable to the conditions we had at the Allen County War Memorial Coliseum where the Fort Wayne swap is hosted, it’s not that big of a deal.

One of the biggest complaints was that there are no longer any tailgate sales.  Up until last year at the Plano Center, one could set up in a reserved area of the parking lot for $8 a day.  Since the layout of the Irving Convention Center precludes that kind of an arrangement, there are no longer provisions for tailgating-you must purchase a table inside.  Swap meet tables run $30 for the whole show.  So, if you were a 2-day tailgater last year for $16, you now need to pay $14 more and cart all of your stuff inside during the setup hours.

Personally, my only real complaint was that there was only one concession stand open in the exhibit hall, and the line got incredibly long there for a while.  There are additional stands in the hall that were shuttered, and I predict that they learned their lesson and will have them open next year.  The food looked average (I only had a pretzel and a Coke), most of it was priced about what you would expect, although the “real food” (hamburgers and such) looked kind of pricy. 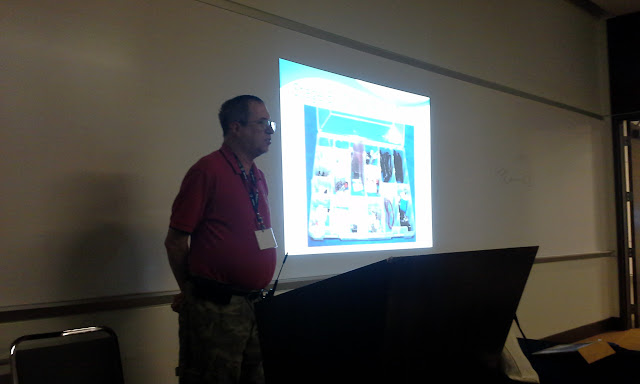 There were lots of forums, I only visited the KØNEB Kit Building forum by my friend Joe Eisenberg, which is always well done.  The forum rooms were nice and clean and the perfect size, and the seats were comfortable.  Much better than the Hamvention forum rooms at the Hara Arena.

The vendors looked to be doing well, Richard at Main Trading sounded a big gong whenever he made a sale over $1000, which happened enough that the gong almost got annoying, and would have except that the frequent sounds reminded us that the ham radio economy was going well in that room.  It was also nice to see Ham Radio Outlet join us, it’s an easy thing for them to do since they opened up their store in Plano earlier this year.

I’m going to give my thumbs up for this swap.  I think they’ll work out some of the hiccups next year.  As far as some of the complaints go, we’ll just have to get used to the changes I suppose-any kind of change can be difficult.  I look forward to next year!