Hams Around the World: It’s official, I’m going to Germany for HAM RADIO in Friedrichshafen

After waffling about it for a few months, I finally made the decision–I’m going to attend the HAM RADIO show in Friedrichshafen Germany this year in June.  I got bit by the bug when Joe Eisenburg KØNEB (the famous Cat-In-The-Hat hat wearing photog famous for his annual photo montages of the Dayton Hamvention) decided to go last year.  After watching his Dayton-esque Youtube Slideshow of the show (embedded below), I decided it was something that I needed to do at least once.

“Friedrichshafen Fairgrounds”).  I will fly into Zurich, Switzerland and take the train to the ferry terminal at Romanshorn, from which I will cross Lake Constance and land at Friedrichshafen. 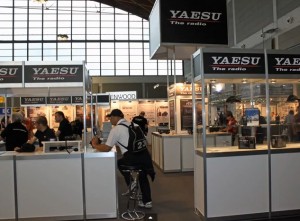 Last year 17,100 radio and electronics enthusiasts from all over the planet converged into the Messe Friedrichshafen, making it generally recognized as Europe’s largest hamfest.  I don’t know if it is the second largest in the world after the Dayton Hamvention (with a 2014 attendance just shy of 25,000) but I’m guessing that Dayton and Friedrichshafen are the two biggest.

I’m especially looking forward to the food…  sausage, beer, schnitzel, and maybe a dose of Sauerbraten or two at the Hoffbrau.

I’ll be taking my Yaesu HT with me, so hopefully I’ll be able to at least make a few UHF/VHF contacts as DL/AD8BC (in Germany) and maybe HB9/AD8BC (in Switzerland).

Joe Eisenberg’s photo montage from the 2014 HAM RADIO show in Friedrichshafen.  The background music is appropriate as well!

A parallel event occurring at the same venue this year will me Makerworld (English translation of this page here), which seems to be a separate event but in the same fairground.  This looks like a lot of fun as well, something like a MakerFaire.

After three days and four nights in a place that looks absolutely beautiful, I will then trade in my Euros and Swiss Francs for Pounds, and my DL/AD8BC for M/AD8BC (it’s too bad I let my UK license MØDCI lapse a decade ago) and spend a few nights in downtown London.  I worked near London back in 2002 and 2003 so I figured I’d drop by while I was “in the neighborhood”.  Again, my Marriott points came to the rescue and I get to spend three nights at the St. Ermin’s Hotel, an historical four-star hotel built in 1887-1889.  I’m hoping to take the train out to Slough and Windsor for a day to visit a few old haunts (for some reason I really miss the chip shop in Langley, and maybe I’ll buy some digestives or Jaffa Cakes at Budgens), and also to spend a full day in downtown London doing the tourist thing again (Double decker bus rides and river cruise, maybe that big ferris wheel thing on the River Thames).

FACTS AND FIGURES FROM THE HAM RADIO CONVENTION IN FRIEDRICHSHAFEN:

The International Amateur Radio Exhibition is celebrating it’s 40th birthday in 2015. We believe this to be a fantastic accomplishment and we therefore would like to thank all of our yearly participants. To another successful 40!

From June 26-28, 2015 HAMs and electronic enthusiasts from all over the world will meet again in Friedrichshafen.

The following subjects will form the main focus of attention at the HAM RADIO 2015:

MAKER WORLD: Do your world, how do you like it

Do it yourself, do it individually, do it original – Messe Friedrichshafen creates the new event MAKER WORLD. The event around the making, tinkering and shapes is parallel to the HAM RADIO and will bring together art enthusiasts, creative thinkers, creatives and DIY enthusiasts. The trend “do-it-yourself” in view, should the new event to provide a platform for art and can be made ​​more creative ideas and experiences, knowledge is exchanged and products purchased and sold. “The World Maker fits well into our portfolio. Our exhibitions at Lake Constance traditionally have an event character and this is evident in the new event. We use the synergies of the Ham radio and the Maker World and appeal to tech-savvy and creative audiences, “says Klaus Wellmann, CEO of Messe Friedrichshafen. The motto “make” – in German “Make” – concludes doing everything in, in which some new arises or something old is individualized and changed. In addition to exhibitors from the fields of 3D printing technology, electronics and DIY is on the Maker World also the take part and try capitalized. “The maker movement emerged in the United States and the subject, make, design and repair itself ‘is also in Germany increasingly popular, “says project leader Petra Rathgeber. “The trend we rely on and provide a meeting place where new business ideas can also be presented.” The issue of “making” speaks every creative head on.From computer nerd who screwed on his PC, via the electronics professional who repaired their apparatus and modified to design end individualists, design and produce the fancy accessories – here everyone can exhibit his ideas that sell and also inspiration for his next Find coup.

tagged with Friedrichshafen, ham radio, hamfest, hams around the world