And another Hamvention has passed into history!  This was the one that we had waited for for ten months or so, since the Hara Arena announced that they were closing their doors forever last July and DARA announced that Hamvention was moving to a new location.  In fact, many people that I know have waited even longer for Hamvention to change locations (ahem, Dan).  Apparently so many people were excited to see the new digs that the attendance this year came to 29,296… almost 4000 more attendees than 2016, the biggest year-to-year jump in attendance ever, and the highest number since 1995 when attendance was 33,000.

So we were all at least a little bit anxious to see how things would work out at the new venue after 52 years at the old Hara.  I was almost as anxious as I was in 2005 as I walked into my first Hamvention.

All in all, in my humble opinion, the first Hamvention at the Greene County Fairgrounds in Xenia was a huge success. Sure, there were things that went wrong, and corrections that will absolutely have to be made for next year, but for the first try after only ten months of planning, it went pretty well.

Since so much has changed over the course of a year, I’m going to divide this review up into two sections — what I believe went well, and what needs improvement.  Remember, this is my opinion only, and I know some of the problems that occurred were bigger for others than they were for me.

This year, although the ticket prices went up three dollars, those three dollars included free parking (at the Hara, you could park at the old dead mall and buy a bus pass for $8, or you could park in somebody’s front yard for $20 (for the weekend) and walk across the street).  You could choose to park right at the fairgrounds, or at one of the four remote lots.  I chose to park at the Young’s Jersey Dairy lot which was the northernmost lot, since I was staying in Huber Heights (I thought about changing hotels but I couldn’t get rates lower than where I had reserved many months before).  Since Xenia cancelled school that Friday, they were able to make their school buses available as parking shuttles for all three days.  It was about a 20 minute ride to the fairgrounds.

My original plan was to try to park right at the fairgrounds, but I had visited the site a couple of months prior and I had concerns that there would be a ton of traffic in tiny little Xenia.  I was right – there were backups longer than an hour in that town Friday morning.  Apparently by Saturday morning their police department was better able to handle it.

On-site parking was at the fairground’s soccer field, which was subsequently destroyed after the heavy rains on Friday and Saturday turned it into a rutty mud pit.  I’m glad that I used the remote lot and I plan to do the same next year. 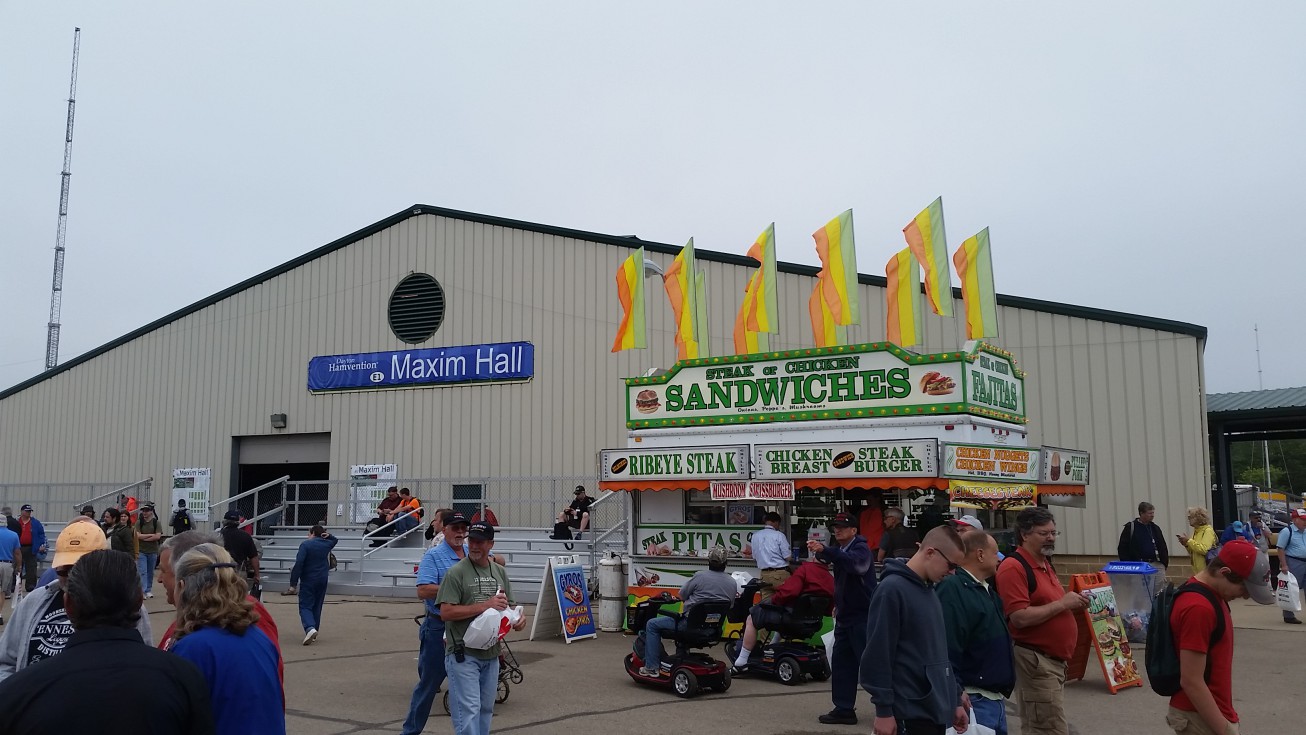 Large banners guided you to the four exhibit halls. Each hall was named after a famous radio pioneer. (AD8BC Photo)

There were four indoor exhibit halls, not including “indoor” exhibit hall 6, which I will get to later.  Buildings 1, 2, and 3 (Maxim Hall, Tesla Hall, and Marconi Hall) were larger steel buildings normally used for agricultural exhibits.  Although I heard more than one complaint about the smell of animal pee, I didn’t smell anything of the sort… but maybe it was because by the time I got to the inside the smell had been overcome by that of the great unwashed.  Building 5 (Hertz Hall) was a smaller hall, but other than that, it was relatively pleasant. 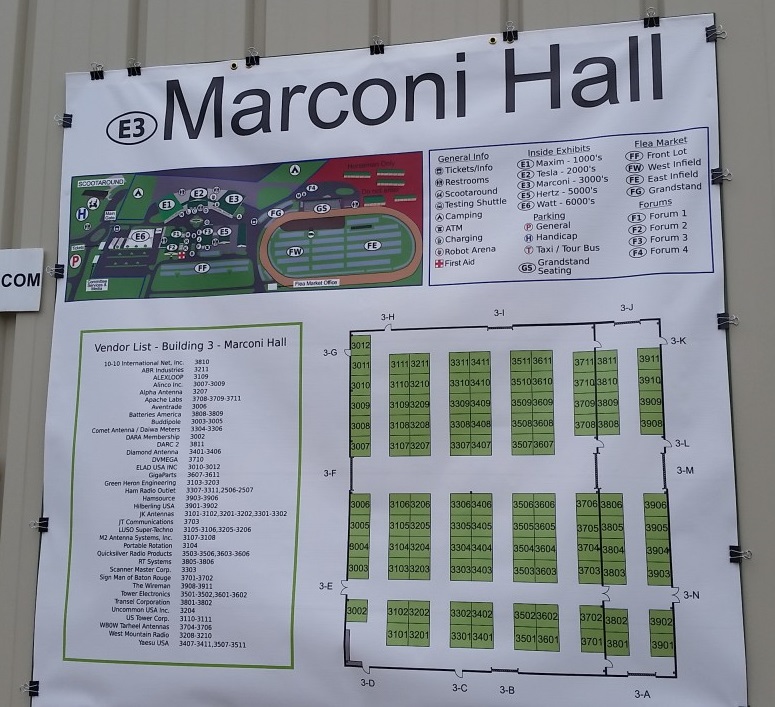 Exhibitor directories at the entrances to each hall. (AD8BC Photo)

According to the numbers, all of the indoor exhibit hall space was sold out this year, although I believe there were slightly fewer spaces than were available at Hara.

Also, each exhibit hall had a directory at all of the doors showing which vendors were located and what their table numbers were.  This was a vast improvement as well.

As with the inside exhibits, the flea market spaces were also sold out.  Again, my impression is that there were fewer flea market spaces available.  This isn’t necessarily a bad thing — there used to be a bunch of empty spaces at Hara, so it balances out.  Most of the flea market was located within the infield of the horse track.  It was nice and grassy and beautiful, Friday morning anyway….. 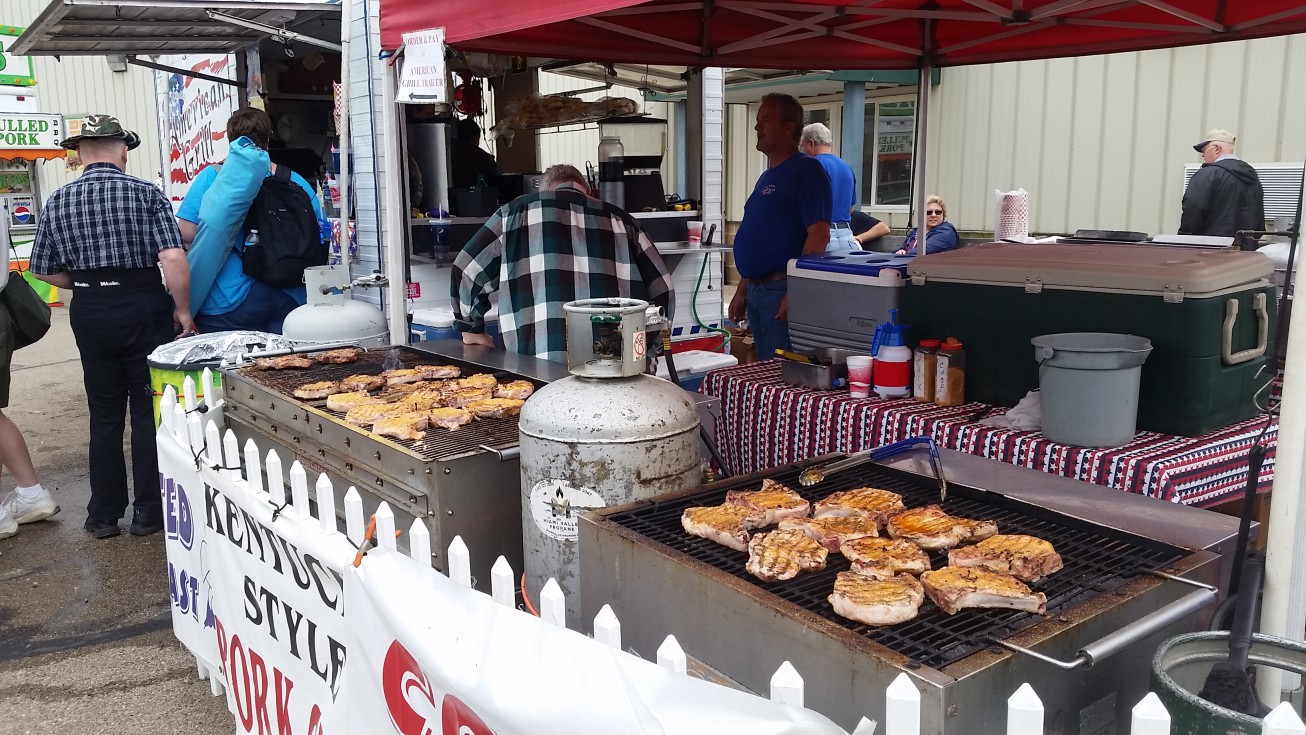 Food offerings like you’ve never seen at Hamvention before!

This is where they really knocked things out of the park — the food was wonderful.  Imagine your local county fair, that’s about how things were here.  I am partial to those gigantic flat pork tenderloin sandwiches, and they didn’t disappoint — neither did the big bone-in pork chop sandwich.  You could find just about anything — meatloaf, biscuits and gravy, chicken and noodles, steak sandwiches…  I heard a few people complain about the price, but the lines were long with visitors willing to pay for it.

I didn’t bother to visit any forums this year but I did get to pop my head into one of the forum halls — they were much nicer than the cordoned-off “rooms” at the Hara Arena.

The Rumpke Raiders once again came through for all of us! (AD8BC Photo)

My bathroom experiences this year were reasonable, of course, as a guy that can pee anyplace and onto or into anything as necessary, there’s not much I could complain about really.  The Rumpke Raiders were there with their sparkling plastic huts as well, and they kept them pumped out as necessary.

Things that need to be improved

As most of my regular readers (all two of you) know, I’m generally a positive person, and willing to give DARA the benefit of a doubt when problems occur.  I know a few things went wrong this year, but I’m not going to hold things against them, unless it happens again.  Always remember, when you complain about Hamvention, please do so intelligently.  I’m going to have to update that post for the new location.

As I stated, I parked remotely so I didn’t get to experience the bottlenecks in Xenia on Friday.  But, I heard that they had it under control on Saturday so there’s one lesson learned that has already been rectified. 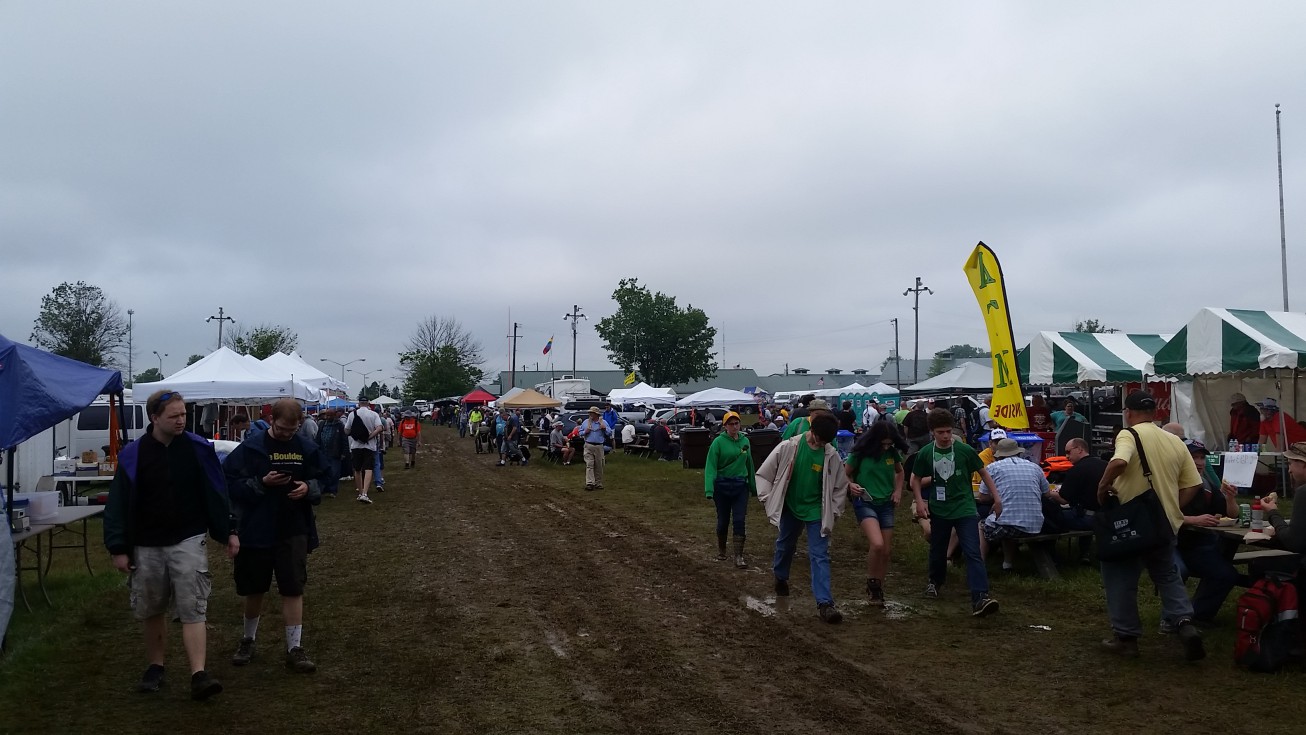 When the rains hit mid-Friday, it started the slow but painful transition of the Flea Market fields from nice grass to a brown muddy color.  As the traffic drove through it Friday evening and Saturday morning, the ruts got deep and by Saturday afternoon, I had decided that that evening would include a stop at Famous Footwear as my Nike’s had effectively been destroyed.  The on-site parking at the 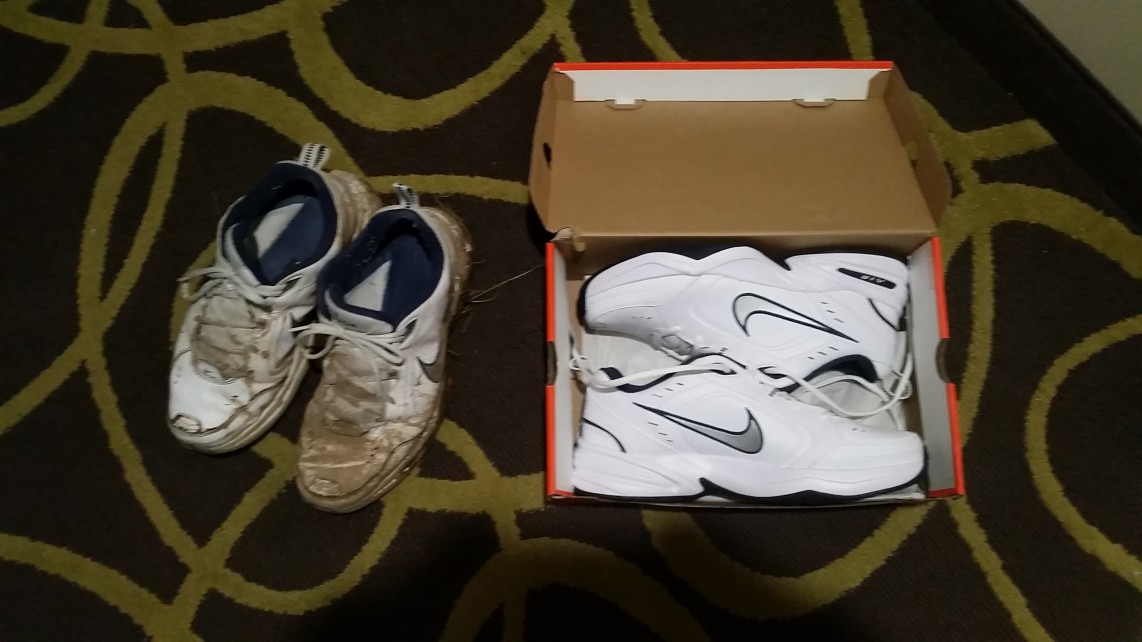 soccer fields was done for as well.

Walking through those areas was damn near impossible, although I only saw a few Hamabouts (mobility scooters) actually get stuck, which was impressive.

As the indoor exhibit space approached getting sold out, the Hamvention folks decided to add some large tents to a parking lot and create “Building 6.”  Apparently, the story is that they ordered some really nice tents but ended up getting some large crappy tents with small holes.  On top of that, the lighting inside consisted of strings of dim LED globes.  It wasn’t horrible — well, until the monsoons came.  My friend at Gold Medal Ideas had a booth inside one of them, and he told me horror stories of running to Walmart to get pushbrooms to push out the standing water that had collected underneath their embroidery equipment — apparently his booth was between the outer walls and the storm sewer.

Of course, there are rumors flying about changes that will be made for next year.  There are rumors of the Fairgrounds adding a new building, of gravel roads being added to the flea market areas to keep vehicles and foot traffic from creating a muddy mess, new tents for “Building 6,” and improved ventilation for the exhibit halls.  Let’s let DARA and the Green County Fairgrounds people do their job, it’s likely that there will be many pleasant surprises next year.

Edibles: Gummy candy for the Maker Ran across this at the Adafruit blog last week.  Who doesn’t like gummy candy?  Or Legos?  How about gummy Legos?  We can do that!  Grant Thompson describes the process at his King of Random video blog.  It’s a really good video-see below. This reminded me of something else I saw on the Adafruit blog back in 2013 – Becky Stern wrote a tutorial on how to make edible gummy LEDs that are almost perfect recreations of the real thing.

Let me start with the history of the handheld radios that I have owned, and then I’ll get into my ideas of combining existing and new features into “my” perfect HT.  WARNING: This is a long article.  Scroll down to Part 2 if you want to get past my history bit.

So I recently purchased a Yaesu VX-8DR HT package for just about $700 (this includes programming software and cable, spare high-capacity battery, quick charge cradle, speaker mic and GPS unit to enable the built in APRS).  My last four HTs have been from Yaesu (FT-470 dual bander bought in the early 90s, VX-5R tri bander bought in 2000, VX-7R quad bander bought in 2006, and the new VX-8DR), and I still have all of them lying around somewhere.  To me, Yaesu is where it’s at with HTs.  That FT-470 was expensive when I bought it (I was in high school and anything over $100 was expensive.  I’m thinking the ‘470 was close to $400, it may have been less.  If Baofeng or Wouxon was an option then, I’d have probably taken it.)  The ‘470 was also big.  Especially when you had the good battery and the 12V charging adapter on it (picture on right is with the small battery.  The big battery was about 1½ times the size of the small battery.  The 12V/charging adapter fit between the radio and the battery).  It was also heavy, and would make a formidable substitute for a blackjack if you held it by the rubber duck antenna.  It could monitor VHF and UHF at the same time. END_OF_DOCUMENT_TOKEN_TO_BE_REPLACED