In the News: 11 Year Old joins the DX Century Club

Ahhh, HF. It’s been a long time since I called CQ on 20 meters. When I lived in Grand Rapids, our local club (The Grand Rapids Amateur Radio Association) opened up our radio room at the Red Cross on Wednesday nights, and I loved playing on 20 and 40 meters. Even some 10 meter contacts when the sunspots were just right.

Since I moved to Texas, I haven’t had the time or opportunity to set up on HF. But this kid in the news is much luckier. WLOX TV in Biloxi Mississippi reports that Brandon Byrd KF5NYQ, an 11 year old General class ham operator (which is impressive enough) has earned his DX Century Club (DXCC) certificate–for those not familiar with this prestigious Amateur Radio award, this means he managed to contact 100 different countries.  Which is about 90 more than I have managed to do in my 25+ years in ham radio.

Before I heap praises on the subject of this story, I’m going to heap praises on the team that turned this story in to NBC 9News in Denver, Colorado.  Reporter Meagan Fitzgerald and photojournalist Andy Buck have done an excellent job on this report.  Seriously, in a world where news reports on ham radio tend to get butchered either by lack of knowledge by the reporters or lack of proper guidance through press releases, this report blew my mind.  To the point where I will personally nominate Fitzgerald and Buck for the 2015 ARRL Bill Leonard award later this year.

And now on to the meat of the matter.  Let’s all welcome Colton Ragsdale KEØCRD to the hobby, one of our newest Technicians.  What makes Colton so special?  He’s five.  And he only missed three questions on the Tech exam.  I’ll let Meagan Fitzgerald explain the whole thing to you because she will do it better than your humble blogger can (after the jump, due to the fact that I couldn’t figure out how to turn off AutoPlay on the embedded video): END_OF_DOCUMENT_TOKEN_TO_BE_REPLACED

In the News: Two sisters aged 9 and 11 pass the General exam 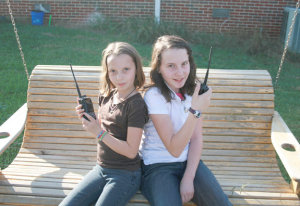 From the Cleveland Daily Banner in Cleveland, TN (via KB6NU’s Ham Radio Blog)

Estee (KK4MVS) and Rebecca (KK4OAU) Ratcliff, ages 11 and 9, passed their General amateur license exam and are among the youngest in the nation to have done so.  Hopefully they will go on to take the Extra exam.  I’m pretty impressed — I got my Novice at 14 years old and it wasn’t until I was 24 that I passed my General and Extra.  Great job, girls!