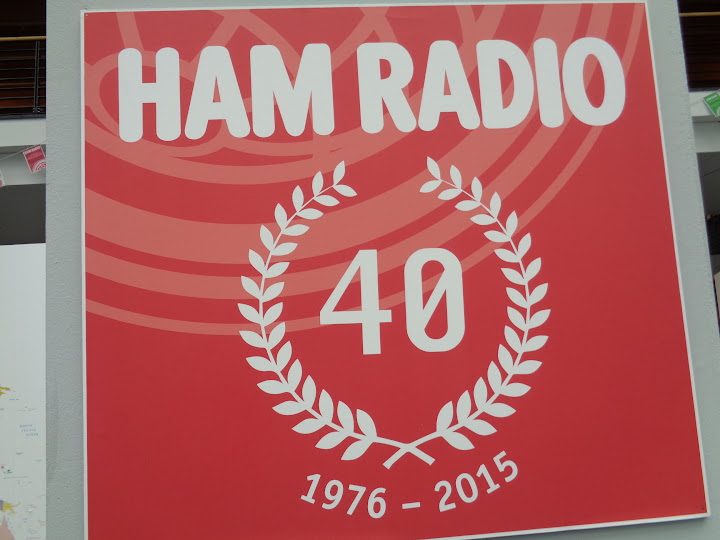 I know I’m a little late in posting this, so I figured I’d better get to it.  I’m going to write this from the perspective of an American amateur radio operator and also one who’s experience with the large ham conventions involves the Hara Arena.  If you read nothing else below this paragraph, just read the following line and go away:
IF YOU HAVEN’T BEEN TO THE HAM RADIO SHOW IN FRIEDRICHSHAFEN, FIND A WAY TO MAKE IT HAPPEN BEFORE YOU DIE.
Seriously.  It’s that good.

I have a ton more pictures than I could ever fit into this blog entry.  At the very bottom I have links to my Picasa albums.  Feel free to take a peek!

The Messe Friedrichsafen sign. It means you’re there. It’s almost as reassuring as seeing the “MONTGOMERY COUNTY” water tower as you round the curve on Shoup Mill Road/Turner Road in Dayton. Almost. AD8BC Photo

HAM RADIO (yes, that’s the name of the show, in ALL CAPS) is the premiere European ham radio convention, held annually at the Messe Friedrichshafen (roughly translated as “Friedrichshafen Fairgrounds”) in Friedrichshafen, Germany.  For the past few years, they have also teamed up with Maker World, a parallel “Maker Faire” style event at the same venue, which is a match made in heaven.  According to rumor, the HAM RADIO is the third largest amateur radio convention in the world, the Dayton Hamvention being #2 and the Japan Ham Fair in Tokyo being #1.  I can’t yet find where the 2015 numbers have been released, but HAM RADIO in 2014 brought 17,100, up from 15,300 in 2013.  In contrast, the Dayton Hamvention topped 25,600 in 2015. 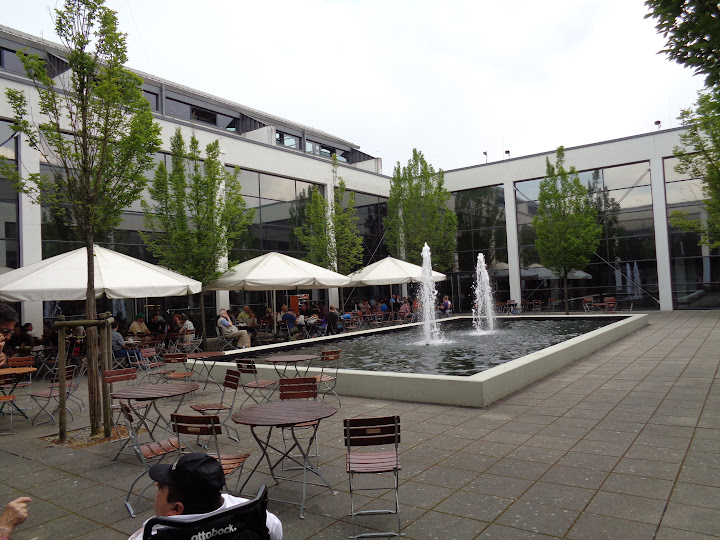 Yes, the Messe Friedrichshafen has a courtyard with a nice fountain. The HARA Arena in Dayton had a fountain once, too.We don’t talk about that anymore. AD8BC Photo

As much as I had promised myself that I wouldn’t compare this show to Dayton, I’m going to anyway.  Just as a frame of reference.  There are two marked differences between HAM RADIO and the Hamvention, the first being that the Messe Friedrichshafen is incredibly beautiful compared to the HARA Arena, and the second being that it appears that the HAM RADIO is a professionally run convention vs. the all-volunteer Hamvention.  Let me stop there for a second — this is in no way saying that I’m favoring the professional approach over the volunteer approach.  The HARA Arena works for Hamvention (it’s about the most suitable place for Hamvention within a two hour drive of Dayton) and I always really like to see how the Hamvention is pulled together each year by an all volunteer crew.  But it’s refreshing to see a ham radio show run very professionally in a beautiful place. 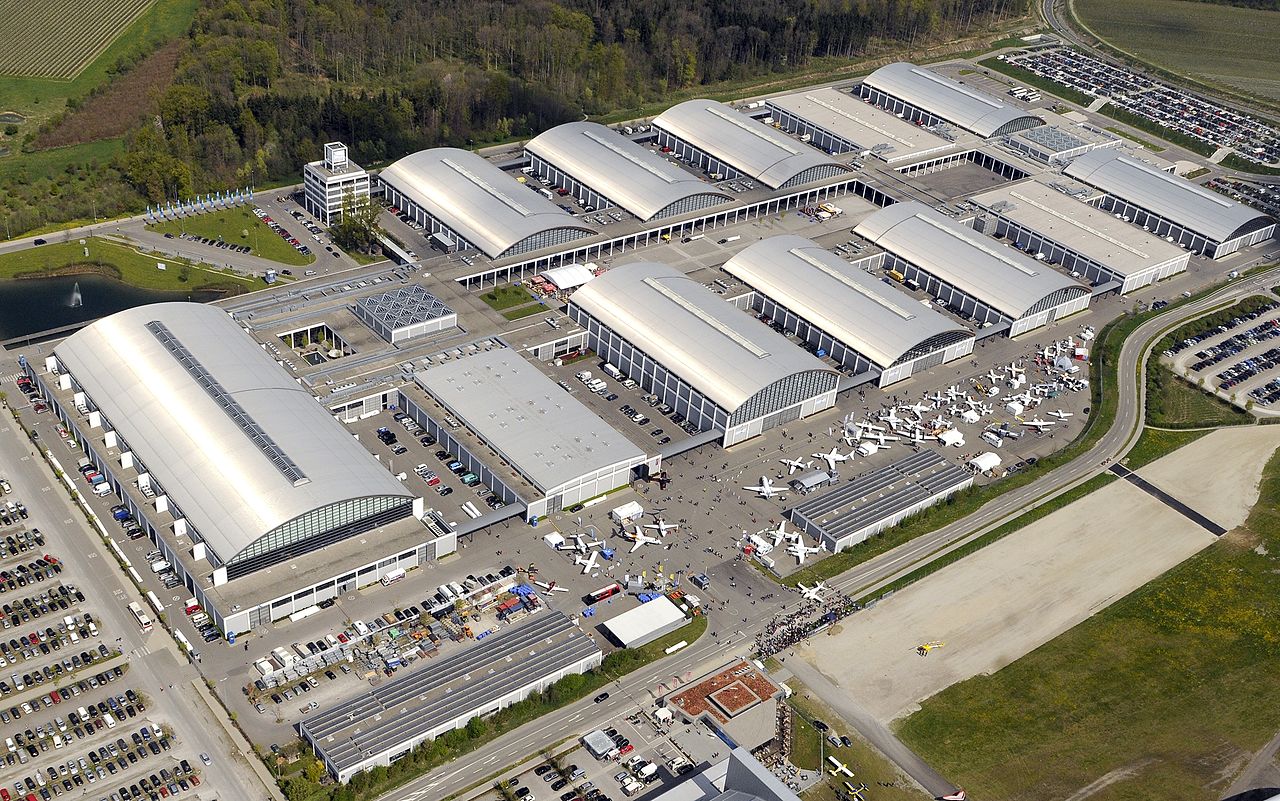 The Messe Friedrichshafen from the air. HAM RADIO uses the large building on the left, and the third and fourth buildings from the left. The fifth from the left houses the Maker World event. Wikimedia photo.

The HAM RADIO show exists in three large airplane-hangar size halls that are well lit and clean with beautiful wood ceilings.  Plenty of room overhead to display antennas.  The largest building, Hall 1, houses the commercial exhibits and the national radio clubs from all over the world, including the ARRL.  The Dayton Amateur Radio Association is represented as well.  In buildings three and four, you’ll find the all-indoor flea market.  In some ways it lacks the charm of the 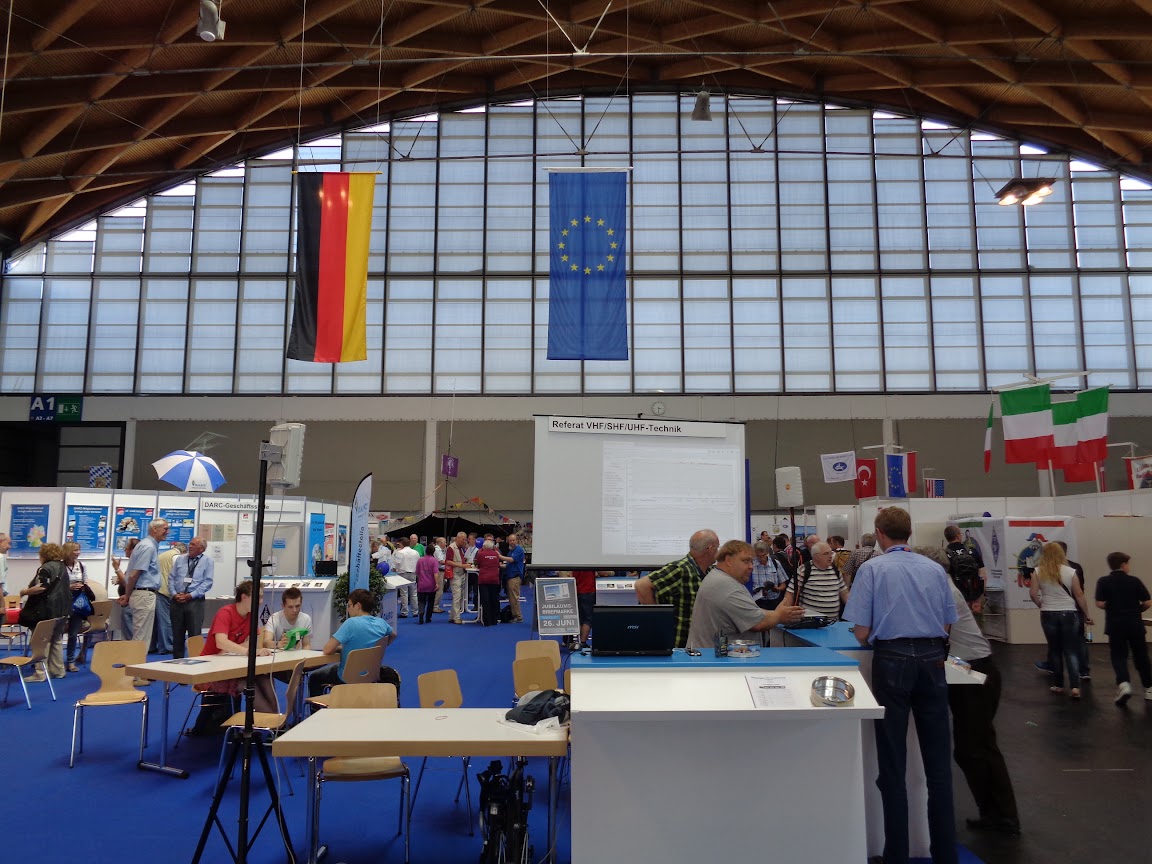 outdoor flea market in Dayton on the broken blacktop, but this is easily made up for by the fact that, well, it’s inside.  Building 5 houses the Maker World exhibits, and admission to Maker World is included with your HAM RADIO ticket (and vice versa).

If you have been to Dayton, you have definitely noticed that it draws an international crowd. The HAM RADIO does as well, and they celebrate it!  A tradition among the international clubs is that many provide snacks from their home country at their booths.  My favorites included sliced fresh prosciutto ham and parmigiano reggiano cheese.

The flea market tables were all indoors, and it seemed comparable to the flea markets at Hamvention and other large hamfests.  Be assured that it’s not just American hams that load up a U-Haul trailer with “junque” year after year to sell.  It was different junque with a European flavor, but still junque. 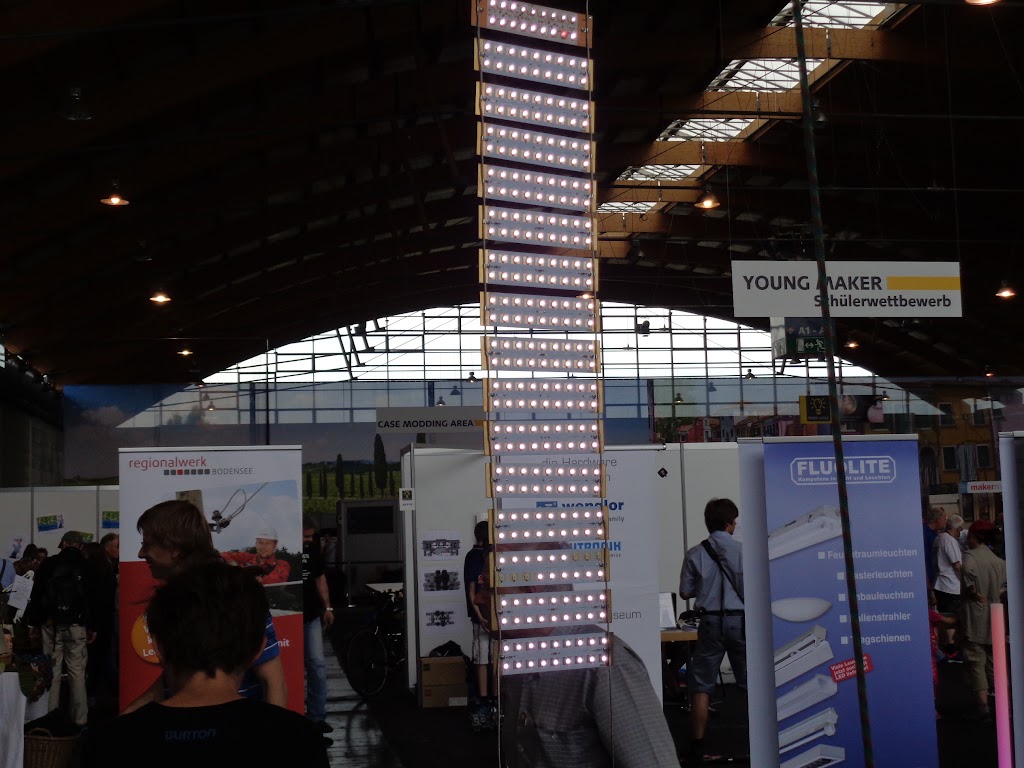 Every one of those LEDs is surface mount. Visitors would be given one of those panels and be taught how to solder the LEDs. When finished, their panel would be clamped to the two powered hanger wires. AD8BC Photo.

At the end of the weekend the LED panels stretched to the ceiling. AD8BC Photo.

Maker World was held on that Saturday and Sunday in  Building 5, and the HAM RADIO ticket also gained admission to this show as well.  I have never been surrounded by so many 3D printers in my life.   There were some robots (including a cool underwater robot), a case modding contest, a place to practice soldering surface-mount LEDs, and lots of Arduino and Raspberry Pi stuff.  And a lot of people dressed in weird interesting costumes. 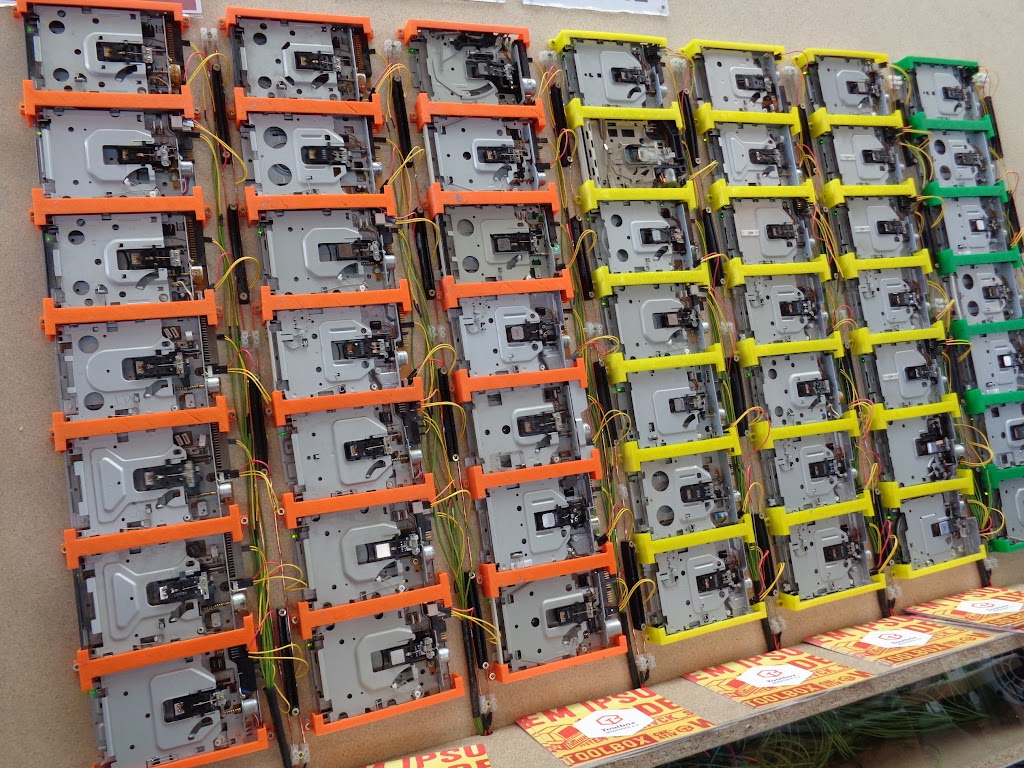 The “Floppy Organ” makes music using the stepper motors in old floppy disc drives. I saw this in person. Click on the photo to see their YouTube video of the organ in action. AD8BC Photo.

I have never been to a Maker Faire or similar show in the US, but it was obvious to me how well these two shows coexisted.  Hams were the original makers, and there are so many parallels between the Maker Movement and ham radio in general.  If the Hamvention ever shrinks down enough to free up a room (and this may not happen anytime soon given that the Hamvention this year only had a handful of empty tables!) I think it would be worth the effort to set aside space for Maker-type vendors and exhibitors.

So, you’ve put the HAM RADIO show on your bucket list.  You may be asking now if it’s difficult/expensive to get there.  I’ll be honest, it ain’t cheap.  But it ain’t difficult either.

The two most expensive parts of this trip were flights and lodging.  Even using my frequent flyer miles, I still had to cough up about $900 for the airline ticket from Chicago to Zurich.  It probably would have cost me $1600-$2000 without the miles.  I was blessed to have a metric ton of IHG (Holiday Inn Priority Club) points, and they had a brand new Holiday Inn Express a few blocks from the Messe, so that worked out swell for me.  Most of you would probably need to pay for a hotel, and if you are used to American hotels, if I were you I’d try for this one.  It’s an easy walk to the Messe, and they will call a taxi cab for you if you want to go into town.

Everything else was easy.  As in really easy.  In fact, I’ll put it to you this way.  Let the only barrier be the expense of the flight and rooms.  Even dining isn’t that expensive.  Everything else is simple and not worth worrying about.  You won’t get lost or stranded, and it’s a pretty safe area.

I flew from Chicago to Zurich Switzerland with a stop at London Heathrow, where I caught a train direct from the airport to Romanshorn Switzerland, and then crossed Lake Constance on a ferry which takes you right into Friedrichshafen, where I caught a cab to the Holiday Inn Express.  The only time I needed to show my passport was when I landed in Zurich, and American citizens are very welcome there with no special visa.  Everybody seems to know enough English to help you, whether they are selling you a train ticket or driving you in their taxicab.

The trains in Switzerland are almost painfully on time, and right there in the Zurich Airport you can buy a round trip combination train/ferry ticket that will take you right to Friedrichshafen and back to the Zurich airport when you return.

So let me say this again: Let the only barrier be the expense of the flight and rooms. This may not be as easy to get to as Dayton.  But set a goal, save up, and do this at least one time.  Don’t worry about not speaking the language, don’t worry about getting around once you get there.  Don’t worry about getting lost.  Friedrichshafen is a wonderful town with friendly people and good food.  Visiting Friedrichshafen won’t be an annual trip for me (like Dayton) but I will definitely try to go every five years or so.

I’m not a professional photographer and I have a ton of pictures, so I’ve opened up these albums on my Picasa page.  Feel free to look around and if you have questions about anything, please email me or comment below!

Published about three months too late from DFW, Texas.