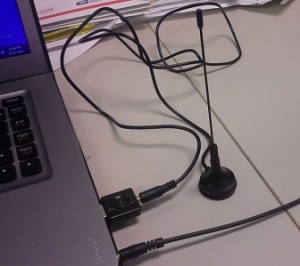 Yesterday I received my latest order from Adafruit — the RTL2832 Software Defined Radio USB Stick.  This nifty little device is sold in Europe as a digital TV receiver (DVB-T) for your computer.  While not compatible with the digital TV broadcasts in the US, with some additional free software, this little guy will tune into radio signals from about 24MHz to 1850MHz.  The “software” in Software-Defined Radio refers to the fact that an application external to the receiver hardware decodes the signal however you want — AM, FM (narrow or wide), single sideband, CW, etc.  The most popular Windows application (and yes, there are Linux programs available as well – the Raspberry Pi is a popular mate for this unit) for the RTL2832 is “SDR-Sharp.”  There are some more advanced applications available that will follow trunking systems and decode some digitial systems such as DMR, D-STAR, etc.  I haven’t downloaded any of these (yet). 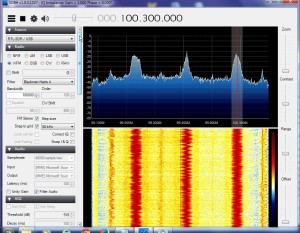 I followed the “Getting Started with RTL-SDR and SDR-Sharp” tutorial at Adafruit and was up and running quickly.  The first thing I picked up was our baby monitor down around 50 MHz-the signal came through clearly.  I tuned into a couple of Amateur Radio repeaters on 2M and 70cm, and the National Weather service transmitter on 162.550 MHz.  It also picks up stereo FM radio nicely on the broadcast bands –  it even decodes the Radio Data System information that the stations use to send station and song information to your radio’s display.  I listened to some aviation VHF-AM signals from DFW Airport but they didn’t come through very strong, an outdoor antenna would have definitely helped.  I like the SDR-Sharp display — you can monitor about 2.5MHz at once, and when you see a strong signal, just click on it and you are instantly tuned in. 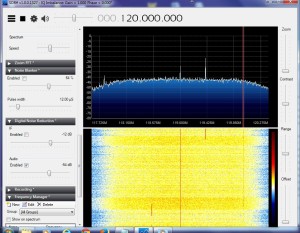 A 2 1/2 MHz slice of the VHF aviation band at the DFW Airport. The RTL2832 tuner doesn’t seem to receive these too well.

The RTL2832 only costs $22.50 and I had about that much in entertainment value with it, I suppose.  It’s not a perfect receiver, obviously, because it really wasn’t designed to do what it does.  If you get one, you will want a better antenna.  I was using my N9TAX Slim-Jim antenna that I bought from N9TAX himself (friend-of-a-friend) at the Dayton Hamvention a couple of years ago – it’s a portable roll-up dual-band antenna that I keep in my suitcase and use with my HT in hotel rooms.  That worked alright but obviously either an antenna tuned to exactly the wavelength you want to listen to would be better.  Or even a nice wideband Discone antenna on the roof.  I’m going to do some more exploring with this receiver during some of my upcoming travels.